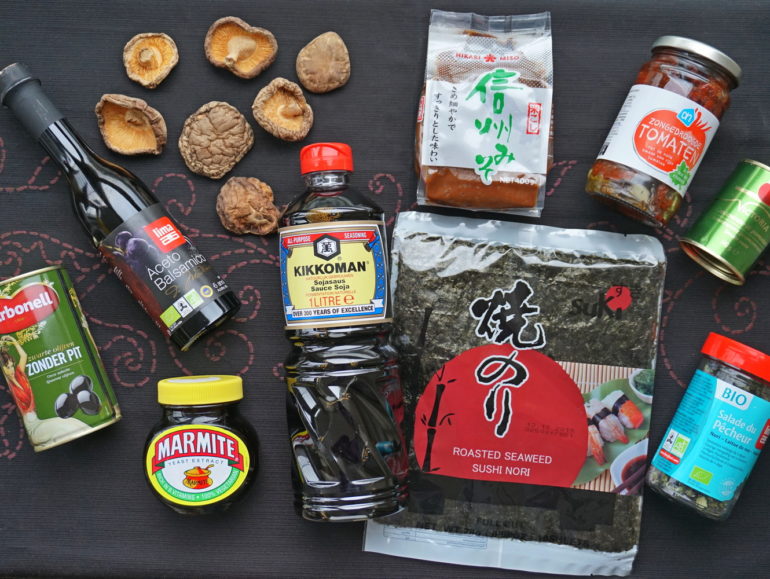 At the Dutch VeggieWorld fair I gave a workshop about 'umami'. Everyone knows the basic tastes sweet, sour, salty and bitter, but have you ever heard of umami? Umami is Japanese for 'savory' or 'delicious' and it is the fifth flavor that people can taste. Japanese cuisine traditionally uses many ingredients that are rich in umami, such as soy sauce, miso, seaweed and shiitake mushrooms. Below I give a list of vegetable ingredients with a lot of umami. I have also developed a recipe for a super flavorful umami paste that you can easily add to all kinds of dishes to give them that little bit of extra oomph.

Umami is common in animal products such as meat and cheese. As a result, people may be disappointed when they first try vegan versions of their favorite recipes. Thankfully, this is easily solved by adding plant sources of umami. For example, put some olives or sundried tomatoes in a pasta dish as an alternative for cheese, and add a dash of soy sauce to soups and stews instead of beef broth.

At the beginning of the last century, Japanese scientists isolated the chemical substances (glutamates) that give us the umami taste experience. Glutamates have a bad reputation for some people, but this is not justified. As you will see below, they are found in many healthy products. A small part of the population may not respond well to purified monosodium glutamate (MSG or E621), but there are plenty of other sources of umami.

With most plant products, the umami is only released when they are mildly processed, for example by fermenting, baking, drying or roasting. This breaks down part of the protein in these products, releasing glutamates that are responsible for the umami taste.

Most good recipes are balanced between all five basic tastes, especially sweet, sour, salt and umami. Consider, for example, a pizza with tomato sauce (sour), caramelized onion (sweet), olives (savory and salt) and mushrooms (savory). Umami enhances the salty and sweet flavors. When a recipe contains sources of umami, you’ll need less salt and sugar! In some dishes, a bitter element such as chicory or Brussels sprouts also works well, but that is not always necessary for me.

This paste is an easy versatile way to add some extra umami flavor while cooking. I came up with the idea of ​​the Taste #5 umami paste, which unfortunately is not vegan (it contains fish and cheese). This recipe may seem a bit strange, but it is actually quite addictive. You can use the paste to season soups and stews, in home-made meat substitutes, and even as a sandwich spread.

Mix all ingredients together. The pasta keeps in the fridge for a week or two. You can also freeze it, for example in an ice cube tray, so that you can easily add a portion to a recipe.

If you don't have all the ingredients, you can safely leave out one or two, but the umami effect is strongest when you use them all. Do you want a soy-free version? Then take two teaspoons of Marmite or Vegemite instead of the soy sauce and miso.